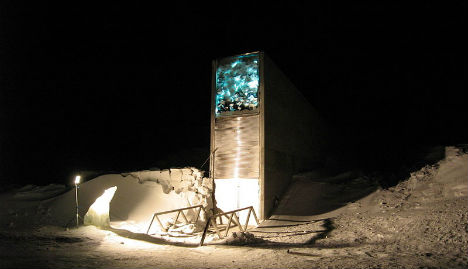 The International Centre for Agricultural Research in Dry Areas' (Icarda), sent its seed bank to Svalbard after its research farm near the city of Aleppo was occupied by Syrian rebel groups, during 2012, the early stages of the Syrian civil war.

The centre, now temporarily headquartered in Beirut, plans to sow and harvest some of the seeds in locations in North Africa and the Middle East.

“The gene bank wants use to send some of the seeds back this autumn, to grown and harvest them. Then they want to send the new seeds up here again as a back-up,” Norway's agriculture minister Sylvi Listhaug told VG newspaper.

The requests marks the first time that seeds sent to the Svalbard Global Seed Vault have been returned to the sender for planting and harvesting.

“I don't think they're getting back in to Syria any time soon, so they're going to re-establish that gene bank centre now in two locations: in Morocco and Lebanon,” Cary Fowler, founder of the Svalbard Global Seed Vault, told Australia's ABC news.

The Svalbard Global Seed Vault is the largest of its kind, with 860,000 seed samples from a total of 64 seed banks around the world are stored there, representing approximately 40 percent of the genetic diversity in the world's seed banks.

Icarda's bank in Aleppo held seeds from all over the world adapted to arid areas,  growing and preserved on 148, 000 acres of land. The seeds are indispensable, as they can give high yield even in very dry regions.

In 2008, researchers at the centre started sending duplicates of the seeds to the Svalbard Global Seed Vault for safekeeping, an effort that intensified when the civil wars started and it became clear that the seeds were under threat.

“The centre was occupied unfortunately by armed forces… but some of them are farmers and they had received seeds from us,” Dr Mahmoud Solh of Icarda told to ABC news.

“They understood the value of the centre and they know we are apolitical and have nothing to do with the government.”

Aleppo remains on the front line, with a number of rebel groups fighting to gain control of the city from the government.

Icarda managed to send duplicates of 87% of its seeds to Svalbard and other seed banks around the world.


“This shows why it is so important to have a global seed bank like this, as a back-up when things occur in the world, and when there is a risk that important germs may be lost,” Listhaug told Norway's VG newspaper from Svalbard on Sunday.

Åsmund Asdal of Svalbard Global Seed Vault is proud that the seed bank serves it's purpose.

“This tells us that the seed vault is one of the wonders of the world,” Asdal told VG.

“It's a great thing for Norway to be able to send back seeds to seed banks that are no longer working. We have built this seed vault, in one way, it is our gift to the world.