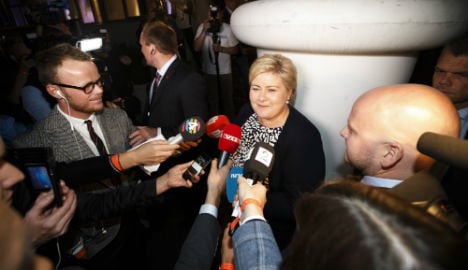 Norwegian Prime Minister Erna Solberg arrives at the Ekeberg Restaurant in Oslo, where the Conservative Party was holding its election night party. Photo: Heiko Junge / NTB scanpix
With nearly 60 percent of the vote counted at 11pm, the Conservative’s party had just 21 percent of the vote, down 6.9 percent from the last municipal and council elections in 2011.
Meanwhile, the Labour Party, which lost power nationally in 2013, looked to have won around 34 percent of the vote, up 2.3 percent on 2011.
“If this keeps going up to the finish, it will be our best local election in over 30 years,” the party’s deputy leader Hadia Tajik told NRK early on Monday evening.
Oslo’s mayor Fabian Stang, who has ruled the city since 2007, said on Monday evening that he would stay in the role if the left-wing parties, with the support of the  Green Party, ousted the right-wing parties from power.
“I would think it would be completely unnatural for me to continue as mayor,” he said. “I assume that either the Green Party will take the mayor job after negotiations with Labour,  or that Labour will takes it itself.”
Although the Greens are nominally independent, Stang said that in reality they were allied to Labour.
“My experience is that they are on the left. In Oslo, the Green Party votes with the left in eight out of ten cases.”
In Bergen, the home town of Norway's Prime Minister Erna Solberg, the party's share of the vote looked set to fall by some 13 percentage points to 21.7 per cent, while the Labour Party’s share rose by 10 percentage points to 38 per cent.
Conservative party’s mayor Trude Drevland has been on sick leave since June, following a scandal over her failure to declare luxury trip to Venice on the private jet of the shipowner Torstein Hagen.