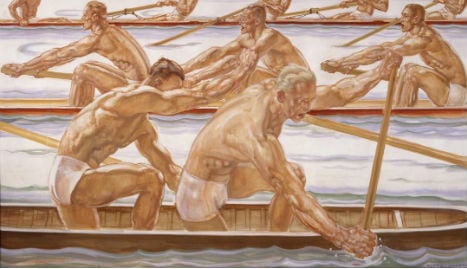 Kode Art Museums' Art in Battle exhibition is exhibiting the fascist art, which includes works by German Nazi leader Adolf Hitler,  alongside art from the period deemed 'degenerate' by the regime.

“It's important that we as an art museum dare to se the dark side of art,” Karin Hindsbo, director of Kode art museums told Norway's Dagbladet newspaper.

“Art can be dangerous. The Nazis cultivated a particular human ideal, and called art that did not fit in 'degenerate'.”

During the Second World War, cultural institutions in Norway and elsewhere were co-opted by the Nazis, and became an effective part of Germany's propaganda machine, showing art approved by the regime.

In Munich in 1937, there was an exhibition of degenerate art, where modernist artwork was hung in a chaotic manner with labels mocking and ridiculing the artists.

The exhibition was a huge a propaganda success story for the Nazis, and toured several cities in Austria and Germany before and during the war.

Norway was unique in that a similar exhibition, 'Kunst og ukunst' (art and non-art), opened at the National Gallery in Oslo in 1942, while Oslo was under Nazi occupation.

Art in Battle partly reconstructs the 1942 exhibition, as many of the artworks displayed by the Nazis never left Germany after the Nazi's defeat in 1945.

According to Hindsbo, it was important for the Nazis that the Norwegians supported the idea of Aryan superiority.

“Art is a powerful tool that can be used and abused. I think our exhibition shows that clearly,” she said.

Below is a work by Hans Rossmanit, a German soldier, painted in 1943 in Tromsø:

Below is Linedanserinne by Jais Nielsen, painted in 1917 and considered degenerate by the Nazis.