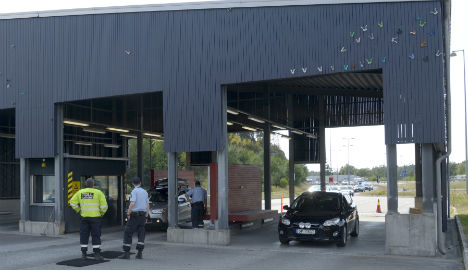 John Skarpeid of the Østfold Police, which is responsible for Norway's busiest border with Sweden, said that many migrants were abandoned by those they had paid to get them to Norway while they were still in Sweden, leaving their relatives to manage the final stage of their journey.

Helping refugees cross the border is illegal in Norway, even if no money changes hands, leaving the relatives at risk of prison sentences.

“The maximum penalty is three years. But in practice you receive 60 days in jail if you help a relative,” Skarpeid said.

Six out of ten reported cases of smuggling take place in Østfold along the Swedish-Norwegian border.

So far this year police have uncovered 38 cases of people smuggling, a sharp increase compared to last year. In 2014, police reported just 13 cases between January and September.

The Norwegian organisation for asylum seekers (Noas) is highly critical of the practice of charging relatives with trafficking migrants.

“Is this what we really want? Do we want to punish family members for helping their loved ones to live in the same country when we know what the situation is like in Syria?” argued Jon Ole Martinsen, Noas' press spokesman.

The Norwegian police say that they are more concerned about cases where smugglers are making money off migrants.

“Law makers have decided on a law that says it's a crime to help people who do not have valid travel documents. We want to apprehend the professional smugglers who make money, and punish them harshly. But when we are talking about people who help relatives, so there is little value in punishing them,” Skarpeid argued.