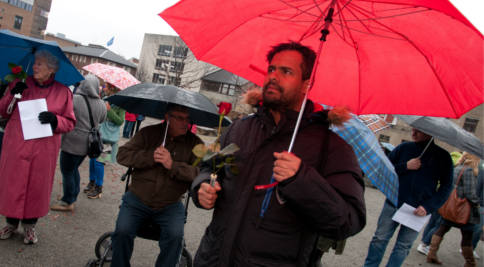 Mubarak Haji Ahmed's brother Khaled Ahmed Taleb, a local politican, has already been deported. Photo: Jo E. Brenden / NTB Scanpix
Mubarak Haji Ahmed, who arrived in Norway at the age of 10 and is now 23, has twice had his case rejected by Norwegian authorities.
His family, originally from Djibouti, lied to obtain the right to stay in Norway, claiming they were Somalian. Ahmed later obtained Norwegian citizenship.
Because their residency permits were issued on false grounds, Norway has withdrawn them — and while they officially do not risk expulsion they are no longer entitled to residency, leaving them in an unclear and precarious situation.
The case has sparked an outcry in the Scandinavian country, with many shocked that Ahmed can be punished for the lies of his family, in addition to his tragic fate in the 2011 attacks and the fact that he is now married to a Norwegian woman with whom he has a newborn baby.
On July 22, 2011, the young Muslim narrowly escaped death when right-wing Islamophobe Anders Behring Breivik opened fire on a gathering of the Labour Party’s youth wing on the island of Utoya, killing 69 young people, after having set off a bomb near the government offices in Oslo that killed eight others.
Ahmed’s 19-year-old brother Ismael was killed when Breivik shot him in the
head.
Their father, who also had his residency permit withdrawn, died five days after returning to Djibouti voluntarily this summer, despite doctors’ recommendations to stay in Norway.
Mubarak Haji Ahmed, who has suffered from psychological problems since the 2011 attacks, is now shying away from the media spotlight.
“I’m preparing a case” against the state, Ahmed’s lawyer Jostein Loken told AFP. “This case is so special that Norwegian authorities may change their minds under the pressure,” he added.
As Norway struggles to close the chapter on the Breivik attacks, the worst in its peacetime history, several dozen people gathered outside parliament on Thursday evening to protest against Ahmed’s possible expulsion.
“Norway has been hailed for the solidarity it showed after the attacks but the way it is treating Mubarak today is the complete opposite. It’s shameful. He’s done nothing wrong,” the head of the Norwegian Centre Against Racism, Rune Berglund Steen, told AFP.
The Norwegian immigration agency’s appeals body UNE has meanwhile stressed that while Ahmed’s nationality has been withdrawn, that does not mean he will be expelled from Norway, contrary to some media reports.
He will be able to apply for a new residency permit under family reunification rules owing to his marriage to a Norwegian woman.
“UNE’s decision does not mean he will be expelled,” spokesman Bjorn Lyster told AFP. “The fact that he has lost a residency permit that was granted on the basis of erroneous information doesn’t mean he can’t obtain a new permit if he applies for one and meets the criteria. With a Norwegian wife and baby, he can apply for family reunification,” Lyster said.
But such an application normally has to be submitted from abroad, and requires the family member in Norway to prove that he or she has the financial means to provide for the family.
Berglund Steen fears Mubarak will be required to leave the country.
“It’s very easy for authorities to say he isn’t going to be expelled, but one day or another he’ll have to leave. Why make him wait for five years in Djibouti when the authorities know perfectly well that he has a three-month old baby girl waiting for him in Norway?”.
Url copied to clipboard!