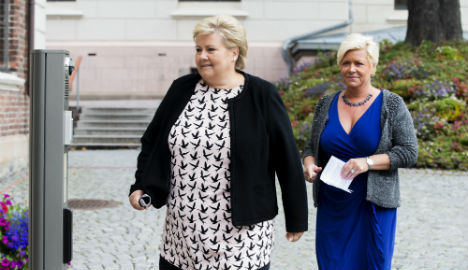 Norwegian Prime Minister Erna Solberg arrives at a press conference on Wednesday. Photo: Cornelius Poppe / NTB scanpix
According to Norway’s Aftenposten newspaper, Norway intended to transfer 47m kroner of its contribution to the European Economic  Area (EEA) directly to Greece so that the country can manage its challenges with refugees crossing over to its islands by sea.
Norwegian Prime Minister Erna Solberg, said that she had felt a pressing need to give support.
“I, like all Norwegian people have been affected by the images of refugee flows we have seen in recent days,” she said.
She said that her government had yet to hear back from Greece on its offer.
“We’re just waiting to hear back from the Greek government, which is currently a bit difficult to communicate with,” she said.
Close to 340,000 refugees and migrants have arrived in the EU in the first seven months of this year in the worst refugee crisis since the Second World War.
“We need to take some new steps. Maybe we need to allocate migrants differently from how we do it today, perhaps we need to look at other solutions,” she said.
Solberg told the newspaper that Norway would no longer automatically send asylum seekers back to Greece simply because this was the first country they arrived at in Europe, as she did not believe the country had the capacity to settle them.
“The Greek authorities are unable to deal with the crowds of migrants that are washing up over their islands,” she said. “The current situation is not sustainable, no one in Europe believes it is.”
Under the European Union’s Dublin agreement, refugees are supposed to seek asylum in the first country they arrived in within the union.