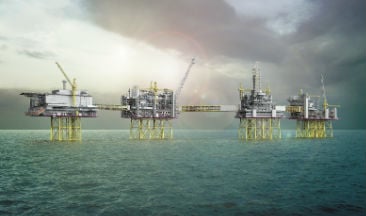 A digital mock up of the Johan Sverdrup Field Centre. Photo: Statoil/Digital
The project, headed by Norwegian oil group Statoil, is a huge boost to the country’s flagging oil sector, which has suffered from plunging investments due to lower oil prices.
“The development will be of enormous significance for employment and activities on the continental shelf in the future, as well as for many onshore suppliers,” Oil and Energy Minister Tord Lien said in a statement.
Norway, where oil and gas account for about 20 percent of the economy, has suffered from the falling oil prices, which have more than halved in the past year.
Oil companies have as a result limited their investments, and more than 20,000 jobs have been cut in the sector since the start of 2014, pushing unemployment up to 4.3 percent in May — a figure which is low compared to
many other European countries, but is the highest Norway has seen in over a decade.
Johan Sverdrup is expected to begin production at the end of 2019. Investment in the first phase is 117 billion kroner (12.7 billion euros, $14.3 billion), though partners in the project hope to bring down the bill by
benefiting from falling costs in the oil business.
The project is expected to create 51,000 direct and indirect jobs.
“We are on schedule,” senior Statoil official Oivind Reinertsen said. “The project activities will now be stepped up, and more contracts will be awarded in the autumn,” he said in a statement.
Contracts worth 40 billion kroner have already been awarded, the group said. Production at the oil field is expected to be between 315,000 and 380,000 barrels per day during the first phase, before reaching 550,000 to 650,000 once the field is completely developed.
Norway’s entire production currently ticks in at around 1.5 million barrels per day.
Statoil holds 40.03 percent of the project, Swedish group Lundin 22.60 percent, Norwegian state-owned group Petoro 17.36 percent, private Norwegian group 11.57 percent and Denmark’s Maersk 8.44 percent.