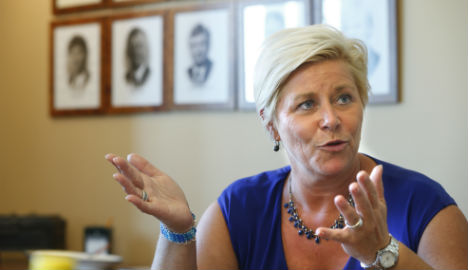 Progress Party leader Siv Jensen at the start of her campaign. Photo: Terje Pedersen / NTB scanpix
Just 9.3 percent of Norwegian voters would vote for the party if the municipal election happened tomorrow, according to a poll by Respons Analyses, down 2.9 percentage points since the last poll in June.
This compares to the 11.4 percent the party won in the 2011 municipal elections, which was itself its worst result since 1995. In 2007, it won 17.5 percent of the vote.
“The explanation is quite indisputable,” Harald Stanghelle, Aftenposten’s political editor, wrote. “Many voters who allow themselves be inspired by Progress as a protest party do not like the ruling party of the same name.”
At the same time, the Labour Party soared in the polls, with 35.4 percent of voters saying they would back the party, up 2.5 percent on June, putting it on course for one of the best municipal elections in its history.
Progress's declining share of the vote since it entered government in coalition with the Conservative Party in 2013 arguably prompted the Danish People's Party, which became the second largest party in parliament in an election in June, to decide to remain outside the government.
The Finns party, another populist party in the region, struggled since joining the government after April's election, on Thursday voting in favour of a third European Union bail out for Greece, something the party's leader Timo Soini had previously pledged he would never support.