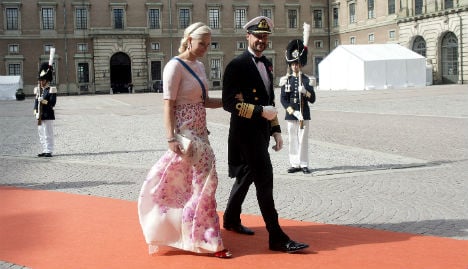 Mette-Marit was shown in Hello! wearing this unflattering dress. Photo: : Jon Olav Nesvold / NTB scanpix
Hello! asked its readers to vote on ten royal women, including Crown Princess Mary of Denmark, Kate Middleton the Duchess of Cambridge, Queen Maxima of the Netherlands, and Queen Rania of Jordan.
Just 1.18% of the readers voted for Mette-Marit as the best dressed, putting her last in the list, with Crown Princess Victoria of Sweden and Queen Rania of Jordan claiming the second and third to last places, with 1.98% and 2.89% respectively.
To be far to the popular Norwegian princess, Hello! chose to illustrate the poll with a picture of her in an unflattering pink floral dress
Princess Mary, the Australian born wife of Danish Crown Prince, who topped the poll with 27.32% of the vote was photographed wearing a figure hugging flowing ball gown.
Mette-Marit was a controversial figure when she first married Crown Prince Haakon. She had spent much of her early 20s partying and clubbing, and was a single mother to Marius Borg Höiby.
In terms of style, Mette-Marit has been dubbed “bohemian” by Huffington Post for her airy blouses and wide-legged jeans, while People magazine claims the princess looks “like Frozen’s Elsa.”
You can vote for Europe’s best dressed royal here.