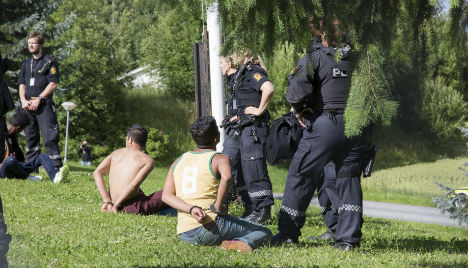 Two of the rioters at Lunner reception centre after being handcuffed by police. Photo: Torstein Boe / NTB scanpix
The 20 youths last week barricaded themselves inside the gym at the Lunner Reception Center, throwing stones at police in protest at the decision to move one of the youths — who police believed had lied about his age, and was in fact over 18.
“It will probably have consequences for their residency permit assessment,” Jøran Kallmyr, from Norway’s Ministry of Justice told NTB newswire about the protest. “As we saw at Lunner if can be difficult to deal with young people who are seeking asylum alone. It may turn out that a person isn’t under 18 and should perhaps be returned.”
Save the Children accused Kallmyr, who is from the anti-immigration Progress Party, of seeking to demonize the children.
“It’s kind of horrible what they’re planning. These people are just children and they haven’t really received any treatment for traumatic experiences,” said Karoline Steen Nylander, the charity’s press spokesman.
“As a child rights organization, we really disagree with the politics, but also with the rhetoric.
She said that the children and teenagers were frequently referred to as “unaccompanied minors”, “juveniles”, or even “criminals”.
Much of the media also argued that they were “anchor-children”, sent alone to Norway to get residency so the rest of the family can then enter the country through family reunion laws.