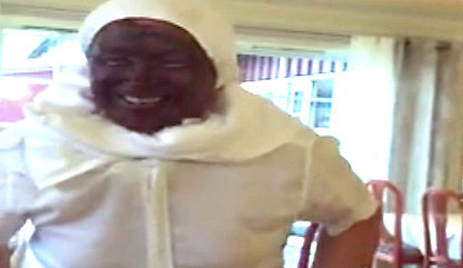 Johnny Olaussen, his face blacked up, attempts to dance like an Arab. Photo: Screen Grab
Johnny Olaussen, who Progress has put forward to be mayor of Gamvik in Norway's far northern Finnmark county, performed the sketch at a party meeting over the weekend.
“They’re blacking themselves up and ridiculing foreigners,” Annik Eriksson from the Nora centre against violence and abuse told NRK. “These are hate crimes. The Progress Party must reject this and apologise.”
“This is just ‘good old-fashioned racist humour’,” added Rune Berglund Steen of the Norwegian Centre against Racism.  “Blackface originated in the US and was a coarse, racist representation of African Americans as stupid. There would be a public outcry if anyone in political circles were to do anything like this in the US.”
But Per Sandberg, the party's deputy leader, who was at the event, said he saw nothing wrong with the sketch.
“It is so politically correct that I can not help but laugh at the criticism,” he said. “I am totally unconcerned about what the Norwegian Centre against Racism thinks today, yesterday or tomorrow. They are totally frivolous and have no agenda other than to tell untruths.”
Jo Inge Hesjevik,  the local head of the Conservative party, which together with Progress forms Norway's ruling coalition government, said that he would never have allowed such a sketch at one of his meetings.
“I believe my Muslim friends would experience this as hurtful. This isn’t something I could allowed in a Conservative meeting,” he said.
The Progress Party has a strongly anti-immigration stance, with many of its more radical politicians such as Sandberg also highly critical of Islam.