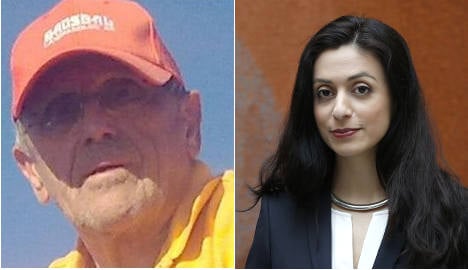 Roald Bentzen, a Progress Party municipal politician and Labour deputy leader Hadia Tajik. Photo: Twitter/NTB canpix
The comment came in the middle of a Facebook thread about Hadia Tajik, who has Pakistani parents and describes herself as a non-practicing Muslim.
“She has a mission from Allah to islamise Norway,” the account for Vestfold FpS, a regional division of the Progress Party’s pensioners’ organisation, wrote. “All those who come here have the same mission, big or small, with or without weapons.”
Labour Party MP Anniken Huitfeldt on Friday called on Progress Party leader Siv Jensen to make a formal apology to Tajik for the Islamaphobic comments.
“Progress have to seize on this. Siv Jensen must apologise,” she said. “There have been several instances of this and now the party has to clean up its act.”
Roald Bentzen,  a municipal councillor in the town of Horten, who made the FpS post, resigned as the organisation’s Facebook administrator, on Thursday night.
Solveig Baga, the organisation’s leader, said she regretted the statement.
“I will give an unreserved apology to Hadia Tajik for the very inappropriate comment that was posted in Vestfold FPS his name. These are attitudes I want to distance myself from, and ones that is not consistent with either our policies or our values.”