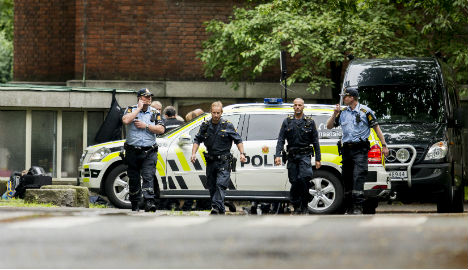 Police outside the Blindern campus on Wednesday morning. Photo: Vegard Wivestad Grøtt / NTB scanpix
Police cordoned off much of the Blindern campus on Wednesday morning after the object was found outside the Physics Department, presumably left by two men who shot at, but did not injure a security guard, at the campus in the early hours of the morning.
In a press conference shortly before 1pm, the police said that they had found no trace of explosives in the device, after carrying out an examination.
“The object was designed to cause fear. It looks like a bomb, but is what the police in technical terminology call a 'hoax',” Johan Fredriksen from the Oslo Police said.
He said it was too soon to know for certain if the bomb hoax and shooting were linked.
According to a tweet from Dagbladet newspaper, the police are now trying to hunt down the two men behind the shooting, which is being treated as an attempted murder.

The security guard was hit in the chest by a 22-calibre bullet in the early hours of Wednesday morning, but was thankfully uninjured as he was wearing a bullet proof vest.
According to the security guard, the man who shot at him was white, spoke English, and was wearing a red cap and grey shoes.
Police at 11.45 issued a statement over Twitter saying that they were beginning the dismantling of the bomb and that they soon expected the situation to be resolved.

Kristian Tuv, a physics student at the university, said that the timing of the attack would worry some students.  “Of course the shooting was quite scary,” he told The Local. “Of course, people might think of July 22, but it’s hard to say. We aren’t speculating on anything yet.” .
On Friday, Norway's Labour party youth movement, the AUF, will hold its annual summer camp on the island of Utøya for the first time since Breivik's brutal gun massacre left 69 people dead.
The university said in a statement on Wednesday morning that it had closed the Physics, Chemistry, Astrophysics and Educational Sciences facilities, all of which are on the Blindern Campus.
Police also restricted access to the local underground station, and instituted a two mile no-fly zone over the area.