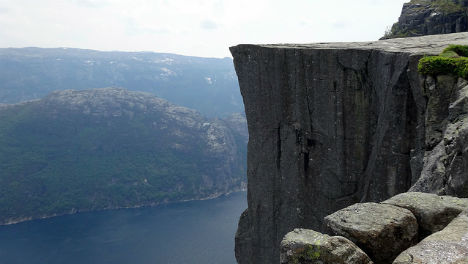 To reach Pulpit Rock, a flat promontory framed by a 600m cliff down to the Lysefjorden, visitors must undertake a two-hour hike before they set foot on the plateau overlooking Lysefjord.

With almost 300,000 visitors a year and no public toilets, tourists heed the call of nature in the surrounding bushes.

“It’s beginning to become a problem that there are no toilets along the trail to Pulpit Rock. There is excrement in almost every bush. On sunny days it smells,” says Audun Rake from the Pulpit Rock Foundation to the local Stavanger Aftenblad newspaper.

The problem is worst around areas designated for camping, where the number of campers has increased dramatically over the last few years.

“People go when they have to, that’s what it’s like everywhere. But there are so many people here that the impact is quite large,” Rake told Norway’s Dagbladet newspaper. “In the designated camping areas, we can see that there are some spots that many people choose to use.”

Pulpit Rock Foundation is working on a solution, and hope to have toilets along the trail ready before next summer.

”We are now in the process of finding the best way to do this, so we many have a solution already next summer,” Rake said.