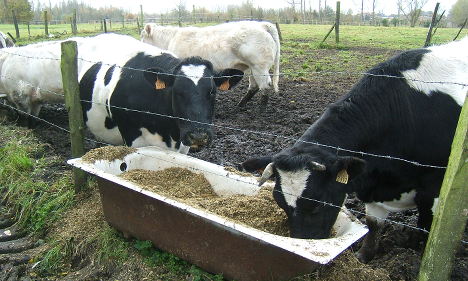 As part of Langfjorddagan 2015, a week-long programme of fundraising events in aid of Finnmarkskollektivet, a treatment centre which helps with intensive and specialised long-term treatment of drug addiction in northern Norway, cow pat bingo, or to give its Norwegian name, kuskit-bingo, has become very popular.

Two cows are turned loose on a fenced-in area which has been marked off in 64 squares. The cow determines the winner by making the first “deposit” on one of the squares.

Farmer Arne Karlstrøm, who organised the event, told Norwegian newspaper, Aftenposten, that he had to “make sure that the animals were well-fed on the day” in order to assure a timely cry of “bingo” from the human participants.

“This is exciting. A wonderful and creative idea of ​​slow bingo,” said Aina Emaus who had bet on squares H8 and E3.

The cows wandered around the whole bingo board and grazed undisturbed. After 50 exciting minutes, it finally happened: the black cow delivered a nice big poo on H6, and a satisfied player became the owner of the first prize; a Go-pro camera.

Kuskit-bingo is one of the many events taking place during Langfjorddagan 2015. Other events include hiking, music workshops, a market, a soccer tournament, an open farm, a fishing competition, and a final closing village party on Saturday.