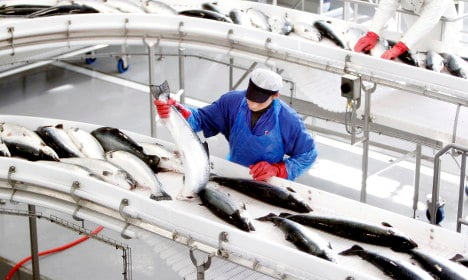 Norway’s contributions will go to projects ranging from public health initiatives to renewable energy in the 15 EU member states where the gross national income per person is less than 90 percent of the EU average.

The Norwegian Fisheries ministry said on Monday it had agreed on new and extended duty-free quotas for certain types of processed fish such as herring and mackerel.

The European market has become more important since Norway's fish exports were banned by Russia last year in retaliation for Norway joining in the implementation of EU sanctions against Moscow over its action in Ukraine.

“It is positive for the industry in Norway and important to develop new markets for these types of fish now that the Russian market is closed,” Fisheries Minister Elisabeth Aspaker said in a statement.

“This is a very good agreement,” said Vidar Helgesen, the government minister in charge of issues involving the EU and Norway’s so-called EØS pact, the agreement that regulates trade between the EU and the European Free Trade Association, which comprises the European countries  – Norway, Iceland and Lichtenstein – that are not members of the EU.

The new EØS pact remains subject to approval in the Parliament and by EU member countries.

Initial reaction from the largest opposition party in Norway’s parliament, Labour, was favourable. “I don’t know all the details, but am very satisfied the negotiations have been concluded,” Labour’s Anniken Huitfeldt, who heads the parliament’s foreign relations and defence committee, told Norwegian news bureau NTB.

“Norway will contribute a considerable amount to many EU countries in a difficult economic situation, while Norwegian business gets good opportunities through the agreement.”