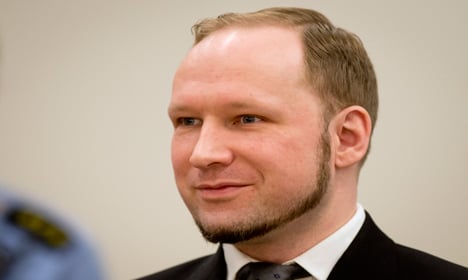 Breivik can study, but can't get a degree unless he can attend certain classes. Photo: AFP

Breivik killed 77 people in a rampage in Norway in July 2011, claiming he was fighting against multiculturalism and a “Muslim invasion”.

Norwegian convicts have the right to higher education if they meet the admission requirements and the course Breivik applied for could in theory lead to a bachelor's degree that would focus heavily on democracy and human rights.

“He got a place here. He meets the criteria,” university spokeswoman Marina Tofting told AFP.

But graduating with a degree is currently not an option for the right-wing extremist — who once made a living from selling fake university diplomas — as five out of the nine courses needed would require him to attend university seminars.

The 36-year-old is currently in solitary confinement without access to the internet, and his contacts with the university will have to be through an intermediary.

“He can't pass these courses until his detention regime is eased or if he is eventually released one day,” he added.

Breivik began his killing spree on July 22, 2011 by detonating a bomb near government buildings in Oslo, killing eight people, and later opened fire on a Labour Party youth camp on the island of Utøya, taking 69 lives, most of them teenagers.

He is serving a 21-year prison sentence that can be extended indefinitely if he is considered a threat.

“It hurts that he is able to study but it's like that in Norway,” the leader of a group for the victims' families, Lisbeth Kristine Røyneland, told AFP.

The fact that the announcement came just days before the anniversary of the attacks “hurts even more,” she said.

“But whether he reads novels or political science books doesn't matter to us as long as he remains behind bars,” she added.

Breivik initially applied to study at the university in 2013 but was rejected since he didn't meet the academic criteria at the time.