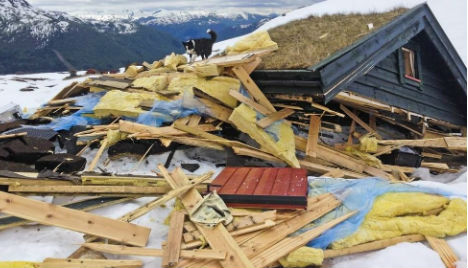 “It was a terrible sight. I tried to find some of my belongings, but everything had been shattered. The only thing I took with me home was a bit of cutlery,” Olav Skjervheim told the regional Hordaland newspaper.

Skjervheim and other local landowners first journeyed up to check on their properties shortly after the avalanche hit in January, but were unable to see anything due to the volume of snow.

It was only this month that the heavy snow cover finally melted away to reveal the extent of the devastation.

Skjervheim wooden house had been carried some 50 metres down the valley by the tumbling snow.

The farm was one of three properties caught in the avalanche.

Here is the farmhouse before the avalanche struck, and afterwards (photos by Olav Skjervheim)