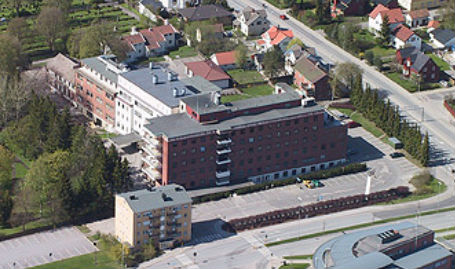 The Østfold hospital. Photo: Østfold Hospital
Reidun Hansen, 70, was admitted to a hospital in Østfold,  south of Oslo, after she broke her femur in a fall at home in September last year.
When she was discharged, a hospital doctor decided to give her a daily prescription of 20mg of Seroxat, an antidepressant which she was already taking.
However, he mistakenly prescribed her 20mg of the chemotherapy drug methotrexate — about three times as much as a typical patient is given over an entire week.
When she got home, Hansen was immediately taken seriously ill.
“I was shocked and thought: ‘This can’t be possible!’” Hansen’s niece Tove Amundsen told VG newspaper. “She had bruises and wounds all over her. It was really a shock. She never recovered after receiving the wrong medication.”
It took three days for the hospital to realise their mistake, by which time Hansen was suffering serious bleeding, and was placed in intensive care on an intravenous drip, as the debilitating effects of the medicine had left her unable to eat or drink.
Amundsen said that to their credit the hospital had never tried to hide what had happened.
“They have not tried to keep anything secret, and have been open about the fact that this was a terrible mistake,” she said. “I’m not going to complain about the information we received.”
After the awful event Hansen was then bedridden until she died in April this year from a pneumonia infection.
“I’m not a doctor and cannot prove that there is a relationship between receiving the wrong medication and my aunt’s death, but I am convinced that she would still be alive if she had not received chemotherapy,” Amundsen said.
The hospital has itself reported the event to the Norwegian Board of Health, and have put measures in place to try and prevent similar accidents happening in future.
Irene Dahl Andersen, the acting head of Østfold Hospital said she would give no further comments on the matter.
“It is a very sad event, which we strongly regret,” she said.
Url copied to clipboard!