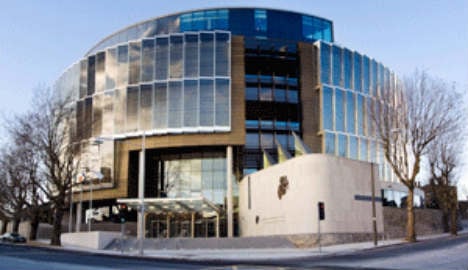 The Criminal Courts of Justice in Dublin, Ireland. Photo: Criminal Courts of Justice
Magnus Meyer Hustveit, 25, from Sandvika, south of Oslo, confessed to what he had done in an email to his ex-girlfriend sent after they broke up.
“I guess it must be under ten times,” he wrote. “It is really difficult. I did it for short-term gratification. I convinced myself it was a victimless crime because you were asleep. Now I’ve written this, you can have me prosecuted. I hope you won’t.”
According to the Irishwoman, who is 28, Hustveit first admitted to raping her in her sleep in early 2012, a few months after they had moved in together in 2011.
When she woke up to find herself wet with semen, she confronted him, and he confessed to what he had done.
Despite her anger and unhappiness, they continued living together, and several weeks later she woke again feeling as if she had been penetrated and finding Hustveit masturbating and watching pornography on his computer in the bed next to her.
In the incriminating email Hustveit wrote sent months later, he confessed to frequently using her sleeping body for his sexual gratification, taking advantage of her heavy sleep, often under the influence of medication.
“I didn’t want to hurt you, I just wanted to come. I used the fact I wasn’t allowed watch porn or masturbate as an excuse,” Hustveit wrote in the incriminating email he sent months later.
He said that he had used her refusal to allow him to watch pornography and masturbate to justify his acts to himself.
The woman told the court that after the assaults she had faced major anxiety issues, an eating disorder and tried to commit suicide.
The Norwegian pleaded guilty to one count of rape and one count of sexual assault.
He moved back to Norway after breaking up with the Irishwoman and has flown back and forward to Dublin to appear in the trial.
The judge, Justice Patrick McCarthy, said that it was important to take into account the fact that if the man had not confessed,  it would have been impossible to prosecute him.
“In truth this case comes here today out of his own mouth,” he said.
Rape Crisis Network Ireland (RCNI) called on the Irish public prosecutor to appeal the verdict to ensure that Hustveit serves time in jail.
“We are very surprised considering the severity of the crimes that he committed,” said Clíona Saidléar, RCNI’s acting executive director.