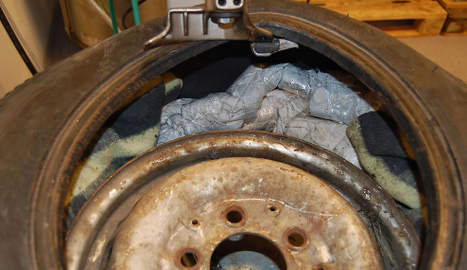 Norwegian customs agents made a huge steroids haul at the Swedish border this year. Photo: Norwegian customs
In the first six months of this year, Norwegian customs have seized more than 240,000 steroid doses, up from less than 95,000 in the first six months of last year.
“It’s pretty scary,” Bjørn Røse, the director of Customs and Excise told NRK. “We are seeing a tendency for young people to use anabolic steroid or testosterone simply to look better. There is a new and frightening culture.”
The statistics may have been influenced by the country’s third largest ever seizure of bodybuilding drugs.
Customs officials discovered 104,000 steroids tablets, 8,600 steroid ampoules for injection, and 21.5kg of liquid steroids in a car at the Swedish border in January.
The use of anabolic steroids was only made illegal in Norway in 2013. Previously it had only been illegal to transport and sell the drugs.
Norwegian customs also reported a four-fold increase in the volume of amphetamines seized over the first six months of this year, a slight increase in the volume of cocaine, and a slight increase in the amount of cannabis seized.
Url copied to clipboard!