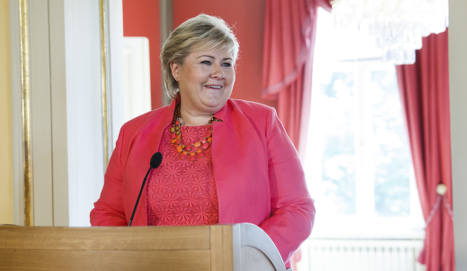 Erna Solberg summing up her government's two years in power earlier this month. Photo: Heiko Junge / NTB scanpix
In an interview with the Norwegian Armed Forces’ Forum Magazine,  Erna Solberg said that she believed that countries’ actual defence capability was all that was important.
“If I’m allowed to speak: I think the the percentage goal is nonsense,” she said. “The aim of the NATO countries must be the greatest possible defence capability, not a percentage goal in itself.”
The problem with the percentage goal Nato countries agreed in Wales last autumn was that it would be harder to meet for country’s enjoying strong economic growth than for those with shrinking economies, Solberg said.
Norway’s defence minister Ine Eriksen Søreide in April described the two percent goal as “very challenging” for Norway in the short term.
Even after this year’s proposed hike in defence spending, Norway will still spend only about 1.6 percent of its GDP on defence.
Nato’s Secretary General Jens Stoltenberg, who was also Solberg’s predecessor as Norwegian Prime Minister, argued on a visit to Norway earlier this month that the country could easily meet the target.
“If there is a political will, there is economic space. But it must be given priority,” he said. “Compared with other major initiatives we have implemented in Norway, reaching two percent is quite possible.”