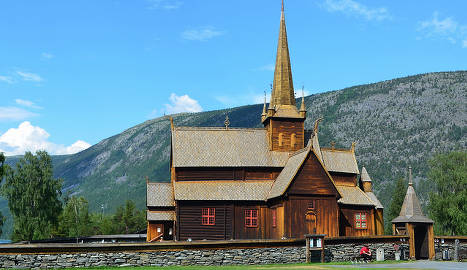 Lom Stave Church. Photo: Niksarebi/Flickr
According to a post by Pew Research on Monday, the “religiously unaffiliated” outnumber Muslims nearly three to one, and will continue to vastly outnumber Muslims even in 2050, by when Pew expects the share of Muslims in the country to have nearly tripled.
Norway had 180,000 Muslims in 2010, compared to 490,000 so-called “nones”, and 4.14 million Christians.
In 2050, Pew expects the number of Christians to have marginally increased to 4.3m, the Muslims to have tripled to 520,000 and the “nones” to have nearly doubled to 850,000.
“Religiously unaffiliated people – sometimes called the ‘nones’ – account for 16 percent of the world’s population, and they make up the largest ‘religious group’ in seven countries and territories,” Pew demographer Conrad Hackett wrote in the post.  “Perhaps more remarkably, they also are the second-largest group in roughly half (48 percent) of the world’s nations,”
Hackett’s analysis is based on Pew’s ‘The Future of World Religions’ report from April, which projected the world’s religious make-up through to 2050.
The report projects that the share of Norway’s population which is Muslim will more than double over the next 40 years, reaching nearly 10 percent of the population.
The study listed Norway as one of the four European countries where continuing immigration was likely to have a big impact on swelling the size of the Muslim population.
The Muslim population in Norway is projected to increase from 3.7 percent in 2010 to 8.9 percent in 2050, with new immigration providing 3.8 percent of the projected rise.
This puts Norway second only to Sweden in terms of the impact Pew researchers expect immigration to have on the share of Muslims in its population in forty years’ time.
The Muslim share in Sweden’s population is projected to grow from 4.6 percent to 12.4 percent with immigration, but only to 6.8 percent without immigration, a difference of 5.6 percentage points.
Immigration provides 3.4 percentage points of the increase in the Muslim share of Spain’s population, 3.0 percentage points of the UK’s rise, and 2.2 percent of that of Italy.
Switzerland and Denmark, both countries where Muslims represent a slightly larger share of the population than in Norway, with 4.9 percent and 4.1 percent in 2010 respectively, are both projected to have a smaller share of Muslims by 2050, presumably because of the two countries’ decisions to tighten up their immigration regimes.