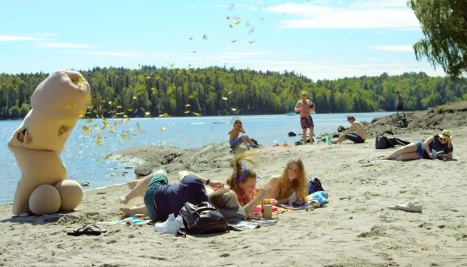 A screen grab from RFSU's video. Photo: Screen grab
“I thought it was hilarious. If I can do a good thing for others, just by being a dick, there is nothing better,” Philip van Eck,  the man inside the penis costume, told Norway’s Tønsberg Blad newspaper.
Philip got the job fronting a campaign for the sex education charity, RFSU, beating the several hundred other applicants primarily because of his height; he is 1.93m tall, and because he fits the costume perfectly.
“Sex should be fun, exciting and a little naughty. We wanted the campaign to reflect that,” said Pernille Berg of Involve! Advertising agency who produced the film. “The campaign found favour and people understood the humour in our message, although many, especially those over 30, thought the campaign was both banal and idiotic.”
Almost 23,000 Norwegians contract  chlamydia every year, but despite the high STD infection rate, Norwegians use condoms to a lesser extent than their Nordic neighbours.
In RFSU’s campaign video, the penis creeps up on people and sprays them with a golden shower of confetti.
The tagline “Tiss kan overraske” means either “Penis” or “urine” “can surprise you”.
“The filming was not unproblematic, as passers-by wanted selfies with the giant penis,”  van Eck said. “Suddenly, lots of people wanted to touch the penis and take pictures with the penis. I almost felt harassed.”
Url copied to clipboard!