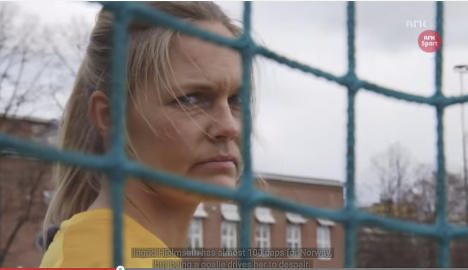 In the video, produced by Norwegian broadcaster NRK, defender Trine Rønning, forward Emilie Haavi and goalkeeper Ingrid Hjelmseth make unexpected revelations, such that they do not understand the offside rule, have trouble remembering to kick the ball, not throw it, and they feel the goal is just “way too big”.
Dekkerhus, dubbed “Norway’s hottest soccer player”, admits to being forced to switch teams, as all her teammates fell in love with her.
“Lesbians everywhere, it's teeming with them”, she said. close to tears.
In fact, in Norway don’t actually suck, or at least they haven't in this year's World Cup in Canada.
This week they are set to face England, after qualifying from group B with two wins and a draw.
The video also make a number of suggestions to FIFA to make the game easier to play, including smaller fields, and the use of a plastic tees for free kicks.