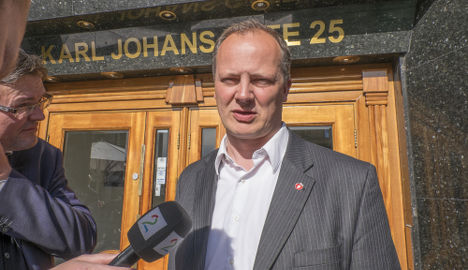 Progress Party deputy leader Ketil Solvik-Olsen after Progress's emergency meeting. Photo: Torstein Boe/NTB scanpix
The party, which dropped out of parliamentary discussions on the issue, on Thursday voted to reject the deal struck by six of the other eight parties in parliament.
“We will propose that we, in conjunction with municipal elections this autumn, hold a nationwide referendum on the refugee issue,” the party’s parliamentary leader Harald Nesvik told Norway’s NTB newswire.
The party agreed on the controversial move at an extraordinary meeting on Thursday, ruling that it would vote against he deal struck by the Conservative Party, its coalition partner in government, with Labour and four other parties.
Progress party deputy leader Ketil Solvik-Olsen suggested submitting the deal struck in parliament for referendum.
“You could submit the agreement now being negotiated, so the citizens can say yes or no,” he said. “I believe that the other parties should listen to the people in this matter. If they believe that they have the people behind them, they should dare  to hold a referendum on such an important topic.”
Norway has not held a referendum since it voted to reject membership of the European Union in 1994, making it unlikely that other parties would back Progress’s proposal.
The staunchly anti-immigrant Progress MP Christian Tybring-Gjedde said before the meeting be believed that Progress should leave the government coalition, as otherwise its ministers would become responsible for bringing the Syria agreement into force.
Url copied to clipboard!