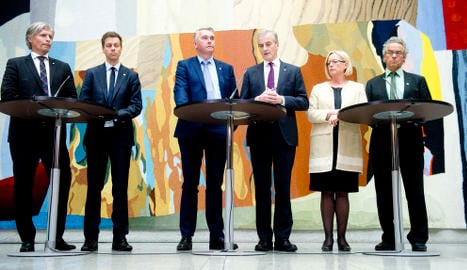 Ola Elvestuen (Liberal) Knut Arild Hareide (Christian Democrat), Trond Helleland (Conservative), Jonas Gahr Støre (Labour), Marit Arnstad (Socialist Left) and Rasmus Hansson (Green) announce the deal
“This is a signal from Norway,” Labour party leader Jonas Gahr Støre said as he presented the agreement in Norway’s parliament on Wednesday afternoon. “If other countries in our situation reach similar agreements, the United Nations will have come a long way towards reaching its goal.”
The country now plans to welcome 2,000 Syrians this year, that is 500 more than previously planned, followed by 3,000 each year in 2016 and 2017.
The new figures aim to meet a quota set by the UN refugee agency UNHCR.
A compromise came after long discussions between the right-wing minority government, which had opposed allowing in any more refugees, and centre and left-wing parties, which wanted to accept 10,000 people in two years.
Under the agreement, financial aid will be distributed to the country’s regions to encourage them to give shelter to those fleeing Syria’s four-year war.
“I think this agreement was good,” Prime Minister Erna Solberg, from the Conservative party, said. “The proposal of the Conservatives and the government was something else, but given that we were facing a parliamentary majority, we could have ended up agreeing a much higher number.”
Per Sandberg, the deputy leader of the Progress Party and its staunchest anti-immigration voice, claimed on Wednesday evening that “caveats” in the agreement meant it could only result in as few as 800 additional refugees from Syria next year and none this year, a fraction of the headline figure.
“This is therefore a gigantic belly flop for Labour,” he said.
However refugee groups welcomed the move.
“This is an important step in the right direction,” the Norwegian Refugee Council aid agency said in response to the announcement. “NRC now urges other European countries to follow. With some exceptions, like Germany, the European countries have done far too little in response to the largest humanitarian crisis in our generation,” it added.
The UNHCR has called on the international community to resettle more people fleeing Syria’s civil war, which it says has triggered the largest humanitarian crisis since World War II.
Nearly four million Syrians are registered with the UN as having fled into neighbouring countries since the conflict broke out in 2011.