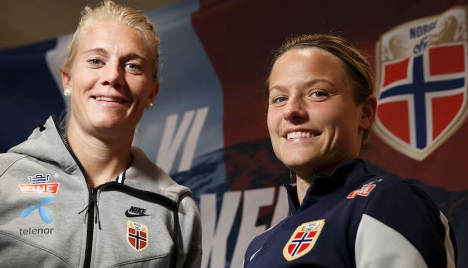 Solveig Gulbrandsen and Trine Rønning missed crucial penalty shots when Norway last played Germany in Stockholm two years ago. Photo: Berit Roald, NTB Scanpix
According to Norway’s Aftenposten newspaper  she sees the tattoo as “a symbol of victory and resurrection”. On Thursday, Norway's captain Trine Rønning will finally have a chance to even the score when the two former champion teams clash for Group B supremacy as the second round of games get underway at the Women's World Cup in Canada.
Hosts Canada will also be in action, going up against New Zealand in Group A in which China face a stiff test against a talented Dutch side in the second of their three group games.
Germany, the 2003 and 2007 winners, are top of Group B with a maximum three points along with 1995 champions Norway.
Both eased through their first games against tournament debutants — Germany thrashing the Ivory Coast 10-0 while Norway beat Thailand 4-0.
The Ivorians play Thailand looking for a first World Cup win in Ottawa later on Thursday.
“It was very important for us to make a good start,” said Germany's Celia Sasic who netted a hat-trick against the Africans.
She pointed out that the tie would be a rematch of the last European championship final in 2013 which Germany won at the expense of the Norwegians.
“We already know Norway very well, as we've often faced one another at tournaments in the past,” said the 26-year-old, who has 60 goals in 105 caps. “It will be a completely different game. We have to be aggressive against Norway, be robust, compact and come out on top in the challenges.
“We need to create chances and convert them. We certainly won't get as many chances against Norway as we did against Ivory Coast.
“The team is well equipped. Norway have very experienced players. In attack, such as Ada Hegerberg and Isabell Helovsen for example.”
Sasic, who set up a decisive goal to make it 1-0 in the 2013 European Championships final against Norway, added: “Norway have plenty of tournament experience, they're used to playing Germany in this kind of scenario at a World Cup. Whatever happens, it will be a tough match.”
Norway won their only world title at the expense of Germany two decades ago, but Germany won their last World Cup meeting 3-0 in the 2007 semi-finals.
Canada dramatically snatched victory against China in the tournament curtain-raiser in Edmonton with a last-gasp penalty from captain Christine Sinclair.
They lead Group A along with the Netherlands who scored their first win on their World Cup debut against New Zealand.
Now the Canadians take on New Zealand, a team formerly lead by their coach John Herdman, and who lost their opener to the Netherlands 1-0.
Hired in 2011 after Canada finished last at that year's World Cup in Germany, Herdman led them to an Olympic bronze in 2012.
“In a World Cup you have three games for a reason and we can't afford to dwell on that first result,” said young New Zealand midfielder Katie Bowen.
China's young 'Steel Roses' will also be looking to bounce back after their first loss in an opener at the World Cup when they take on the Dutch in Edmonton.