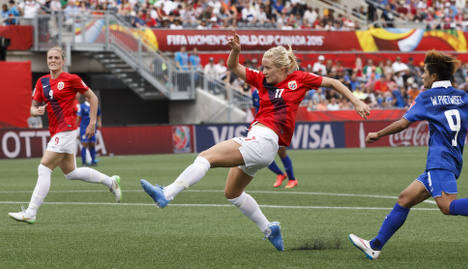 Norway's Isabell Herlovsen, Lene Mykjåland and Thailands Warunee Phetwiset during the Norway-Thailand match at Lansdowne Stadium. Photo: Berit Roald/NTB scanpix
Veteran skipper Trine Rønning opened for the 1995 winners after quarter of an hour with Isabell Herlovsen claiming a quick-fire double after 29 and 34 minutes and Ada Hegerberg putting the result beyond doubt with her 68th-minute header.
Thailand, ranked 29, had missed a chance for their first World Cup goal after five minutes when Silawan Intamee just missed the target following a blazing run down the flanks from Kanjana Sung-Ngoen.
The hammering could have been more severe but for Thai goalkeeper Waraporn Boonsing doing well to keep out a Maren Mjelde penalty awarded for handball with 15 minutes to go.
“The first game of the tournament is always nerve-wracking,” said Norway coach Even Pellerud. “We are happy to have three points, but we have to improve aspects of our play against other teams. We're ready for the game against Germany on Thursday.”
Thailand next play fellow debutants Ivory Coast, before wrapping up their group games against top-ranked Germany.
“We met a very good team and learned how women's football at international level works,” said Thai coach Nuengruethai Sathongwien “Getting the first goal would have given us a morale boost more than anything, because we were playing a superior team.”