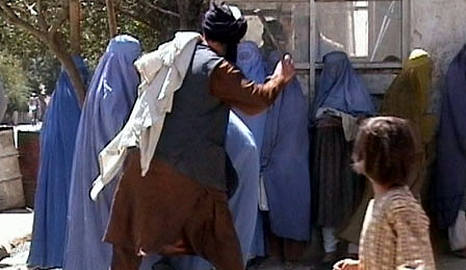 Taliban religious police beating a woman in Kabul on August 26, 2001. Photo: RAWA/Wikimedia Commons
Official efforts to reopen peace negotiations with the Taliban have so far borne little fruit but informal talks, involving Afghans from varied political backgrounds, have occurred in the recent past behind a veil of secrecy.
Norway on Thursday said it was hosting a new round of talks between Taliban representatives and members of Afghan society, with media saying the dialogue was focused on women's rights in Afghanistan.
“A political delegation from the Islamic Emirate met members of Afghan civil society in Norway — to hear their views and to consult them on ending the occupation of Afghanistan by invading forces,” said Taliban spokesman
Zabihullah Mujahid, using the group's official name.
“Such meetings do not imply peace talks,” he added in a statement, without offering any further details.
In last month's informal talks in Qatar, the Taliban, condemned for their misogynistic ideology and lack of respect for human rights, pledged support for women's education and their right to work in “male-dominated professions”,
activists said.
But those revelations prompted scepticism from some Afghan women's rights activists, who accused the Taliban of phoney assurances.
Afghan media said two female members of Afghanistan's High Peace Council (HPC), Hawa Alam Nuristani and Seddiqa Balkhi, and two female lawmakers, Fawzia Koofi and Shukria Barekzai, were part of the delegation in Oslo.
But the HPC, the government's top peace negotiating body, distanced itself from the talks, saying it was not aware of any meeting in Norway.
“It is still unclear what will be the agenda,” Afghanistan's 1TV news quoted lawmaker Koofi as saying before the talks. “However, the issue of women's rights and their role in peace process and after negotiations are most likely.”
Women were brutally consigned to the shadows during the Taliban's 1996-2001 rule in Afghanistan, denied basic human rights and not allowed to leave their homes without a male chaperone.
Afghan authorities have repeatedly tried to jumpstart talks with the Taliban in the hope of ending a 13-year conflict, but the militants have set tough conditions, including the withdrawal of all foreign troops in Afghanistan.
The militants have intensified their annual spring offensive, stepping up attacks on government and foreign targets in what is expected to be the bloodiest fighting season in a decade.
The Norway talks were scheduled to conclude on Friday, Norwegian public radio and television NRK reported.
Url copied to clipboard!