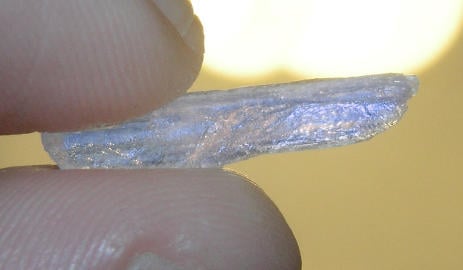 A crystal of illicit methamphetamine hydrochloride. Photo: Psychonaut/Wikimedia Commons
The European Monitoring Centre for Drugs and Drug Addiction (EMCDD) found that Oslo waste water contained a staggering 237.4 milligrams of the stimulant for every 1,000 inhabitants, almost double the concentration found in Germany's Dresden, the second worst-affected city with 133mg/inhabitant.
The concentration of the drug in the city's wastewater has more than doubled since the the last study in 2013, when it was just 107.9mg/inhabitant.
The centre conducts a yearly study of drugs in wastewater to throw light on drug use in 50 major European cities.
It tests the urine markers in wastewater, aiming to use this to build a comparative picture of the real levels of the use of drugs such as methamphetamine and cannabis, both of which are measurable in urine.
Arguably, the method is more reliable than conventional surveys, as it does not require the cooperation of drug users. Drug users may also be unaware of what substances they are consuming, as drugs are sometimes sold under false pretexts.
Anne Line Bretteville-Jensen from the Norwegian Institute for Alcohol and Drug Research, argued that the increased concentration in Oslo's wastewater could be the result of unscrupulous dealers supplying users unawares, rather than the result of genuinely higher demand for the drug.
“Often, drug users are not sure whether they are using methamphetamine or amphetamine,” she told Norwegian broadcaster TV2. “That’s why regular amphetamine users may end up using methamphetamine without asking specifically for it.”
“Amphetamine is mostly used by problem users, who inject or snort, but there are some people who say they use it as a recreational drug, mostly people between 16 and 30,” she added
Despite its oil wealth and welfare state, a high number of people die of drug abuse and overdoses each year in Norway.
In 2014, the number of people who died from heroin overdoses was the highest in Europe according to a report released by the EU drugs agency.