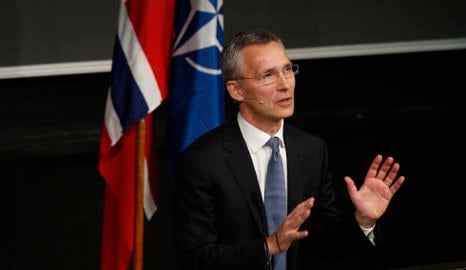 Nato chief Jens Stoltenberg giving a speech at the University of Oslo on Thursday. Photo: Terje Pedersen / NTB scanpix
“What we see is more unpredictability, more insecurity, more unrest… (But) I believe we don't see any immediate threat against any NATO country from the east,” he told Norway’s state broadcaster NRK.
He stressed, however, that he hoped relations with Russia would improve.
“Our goal is still cooperation with Russia… That serves NATO and it serves Russia,” he said.
Stoltenberg commutes regularly between Oslo and Nato’s headquarters in Brussels, but this is his first official visit to the country.
On Friday, he will meet Norwegian Prime Minister Erna Solberg, aiming to pressure her to increase the country’s defence spending in response to growing Russian belligerence.
On Thursday, he made a speech at the University of Oslo, in which he attacked Russia’s failure to respect the borders of its neighbours.
“The prerequisite for cooperation with neighbouring countries is to respect their borders, and that has not been the case when it comes to Russia,” he said.
“Georgia, Moldova and Ukraine are clear examples of this, as well as the Baltic countries, which are constantly facing challenges as a result of Russia’s rhetoric.”
Stoltenberg on Wednesday visited Norway’s airbase in Bodo, near the far Northern border with Russia.
On Thursday, he gave a speech at Oslo University and met with Norway’s Crown Prince Haakon. On Friday, he is also scheduled to hold meetings with Finance Minister Siv Jensen, Foreign Minister Børge Brende, and Defence Minister Ine Marie Eriksen Søreide, and other senior officials. He will also meet the parliamentary  standing committee on foreign affairs and defence.
Norway needs to increase its defence budget by 17 billion Norwegian kroner ($2bn) if it is to meet the two percent target Nato countries agreed at a summit in Wales last year, a target few observers believe will be achieved.
Lobbying for spending increases on his home turf is likely to be particularly challenging, given Stoltenberg’s own record over his ten years as Prime Minister.
“When I was prime minister, I was always worried about balancing the budget,” he admitted. “Now I’m worried about the military balance.”
Bård Vegar Solhjell, the leader of Norway’s Socialist Left party told VG newspaper on Wednesday that he hoped Stoltenberg remembered what his own priorities had been in government.
“In his previous job, Jens Stoltenberg said that it was more important to invest in education and youth employment than to spend significantly greater sums on defence. I hope he still feels the same,” he said.