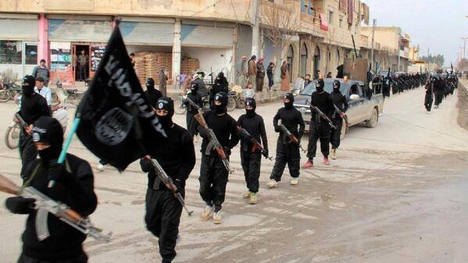 Fighters from the al-Qaeda-linked Islamic State marching in Raqqa, Syria. Photo: Militant website
According to the service, between five and ten of the 1,000 Syrians chosen to go to Norway by the United Nations High Commissioner for Refugees (UNHCR), were discovered to have links to the one of the two terror groups.
“Unfortunately, there are some who try to exploit and abuse the refugee agency,” Police Superintendent Svein Erik Molstad told Norway’s Dagbladet newspaper. “We have discovered more quota refugees with ties to the al-Nusra front and IS,” he said.
PST investigators have so far made two trips to the Middle East,  where it works with Norway’s Foreign Ministry to vet refugees passed to Norway under the UN’s quota system.
According to Molstad, the investigations have also uncovered refugees with backgrounds in Syria’s feared secret police, as well as others suspected of carrying out war crime’s during the country’s ongoing civil war.
Although PST is now working in the Middle East, its officers neither interview nor have other direct contact with prospective refugees.
Dagbladet has also learned of Islamic extremists using refugee reception centres as recruiting grounds for terrorists.
“It's a scenario we are aware of,” Martin Bernsen, PST’s director told the newspaper.
Dagbladet has information that several people who have received asylum in Norway have later become central in the radicalized Islamic community in the country.
“We can not give any guarantees. Our fear is that one or more terrorists we are not aware of manages to get to Norway,” he said.”