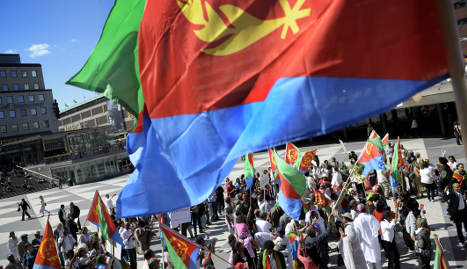 Eritreans demonstrate in Segels Torg, Stockholm for Dawit Isaak, the Swedish journalist imprisoned by Eritrean authorities. Photo: JANERIK HENRIKSSON / SCANPIX
Jøran Kallmyr, state secretary at the Ministry of Justice, plans to soon travel to Eritrea to seek pledges from the Eritrean government that it respect the human rights of returnees.
”If they have been refused a residence permit, it is likely that we can send them back before the end of 2015 if we reach a return agreement,” Kallmyr told Norwegian broadcaster TV2. ”We hope for two good days in Eritrea with great conversations. We expect that the Eritreans will increasingly comply with human rights.”
The UN has recently expressed grave concern regarding the human rights situation in Eritrea, and does not expect it to improve.
A recent UN-mandated inquiry found that there was a clear pattern of human rights abuse in the country.
”Detention is an ordinary fact of life, experienced by an inordinate number of individuals – men and women, old and young, including children,” Mike Smith, Chair of the Commission of Inquiry on Human Rights in Eritrea said at a press conference in March.
“Detention centres range from official to the unofficial, located above ground or underground. Some have metal containers where prisoners are kept in extreme heat. Once in one of them, there is a likelihood that you will be subject to torture to extract a confession or to simply punish behaviours.”
Most Eritrean asylum seekers in Norway have left the country to avoid its brutal national service regime, which can last a lifetime and includes forced labour.
Karin de Gruijl told the BBC that most Eritrean asylum seekers arriving in Europe are between 18 and 24 years of age.
“This intensification of recruitment has sparked fear among young people in this age group who don't want to have this perspective of not knowing how long they will have to serve,” she told the news channel.
Officially, the Eritrean conscription lasts for 18 months, however reports from the country show signs that forced national service is increasing.