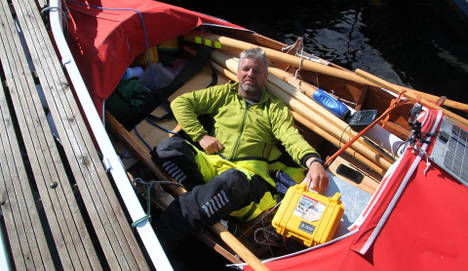 Kjell Tore Solvang takes a short break during his long journey. Photo: Kjell Tore Solvang/Facebook
Kjell Tore Solvang, 55, who trains Norway’s successful national canoeing team, set off on his epic voyage on May 2nd, aiming to row the full 3,300 km journey from Svinesund on the Swedish border to Kirkenes, on the border with Russia.
This week, Solvang reached the city of Bergen after more than 20 days at sea, which have seen him brave rain and powerful headwinds. If all goes to plan, he will reach Kirkenes in three months and ten days.
”I have to say that if you row between ten and fourteen hours a day, your hands get destroyed,” he told Norwegian broadcaster NRK, who met Solvang in Bergen.
So far, his greatest challenge has been blisters in his hands, leading him to some unorthodox cures.
“The first few days I used urine to prevent infections — something I'd got from old sailor. But then I met a shrimp fisherman in Arendal who advised me to use honey. So from Arendal until I got here I've been using honey on my hands.”
At age 58, Solvang is past his peak as an athlete. He has also had to overcome a serious car accident where he sustained injuries to his shoulder, collarbone, and neck.
”The time in the gym was important to me. Being surrounded by people who take care of their health was a motivation. I don’t know what their dreams are, but I haven’t had to train alone and that has helped me come closer to mine,” Solvang told the local Askerøyværingen paper before he set off on his journey.
Solvang is rowing a traditional Norwegian wooden fjord boat that he has modified for the journey, opting not to take advantage of modern carbon-fibre rowing boat designs.
The boat only cost him 40,000 Norwegian kroner ($5,200 USD), which he noted was a fraction of the amount monied Norwegians blow on the yachts found all along the country's coastline.
”It has been like passing a deserted cemetery,” he told Bergens Tidende. “So little life. Almost grotesque, and all the big yachts that are unused from autumn until summer. They are in stark contrast to my little north fjord boat that cost 40,000 kroner and all of the experiences it is giving me,”
Solvang is using his journey to raise money for a brain cancer charity.
”I’m not crazy, but I am a dreamer, and dreams grows bigger the more you live them.” he told Askerøyværingen.
Here's what Solvang's hands look like less that three weeks into his journey. Here's some of the rougher weather he's encountered.