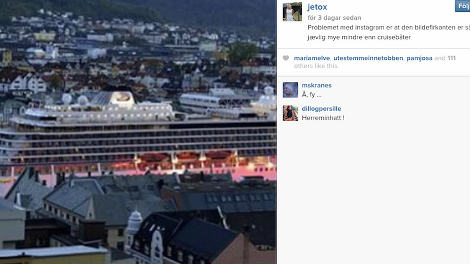 The Viking Star in Bergen. The last post Jette Christensen made before she posted the penis picture. Photo: Screen Grab/Instagram
“Walked by the surest sign that 17th May is over and the christening has begun,” Labour MP Jette Christensen wrote, as she posted the picture on 17th May.
Data in embedded in the picture revealed the exact location in Bergen where it was taken.
Jill Walker Rettberg, a professor of digital culture at the University of Bergen, told the Bergens Tidene that posting the picture violated the man's privacy,
”In principle, no one should post pictures of other people’s genitals without consent,” She told the paper, although she argued that the post would have caused more of a stir if it had been a male politician posting a picture of a woman’s genitals.
Olav Torvund, a law professor specialising in copyright at the University of Oslo, questioned the legality of the of the Instagram post, and argued that an MP should have known better.
”On the other hand MPs are people too, no better and no worse than others. But this is also about good manners,” he said.
Christensen defended herself by arguing that it was impossible to identify the man from the picture and that she hadn't been aware that the man's penis had been visible.
She said she had intended the post as an ironic comment on the decision of Viking Cruises to time the christening of its new ship Viking Star coincide with Norway's May 17 National Day celebrations.
”It was intended as a comment on the christening of a ship and the selling out of the 17th of May. It was not meant to offend anyone,” she told the newspaper.  “I saw the person from the road standing in that pose. I could only see the hand, not the penis, I saw hair, not his face,”
Christensen defended the post by saying that the man could not be identified.
At the same time as the newspaper called, she removed the offending picture from her Instagram profile, which has 2,527 followers.
Url copied to clipboard!