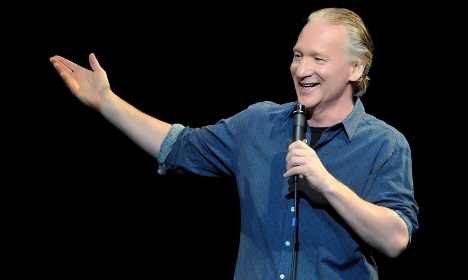 Bill Maher is bringing his stand-up tour to Oslo. Photo: David Becker/WireImage
“I'm starting off my show in Europe a bit like the Dixie Chicks when they got in trouble a couple of years ago for saying critical things about the Bush regime,” he says, referring to the country-and-western band who were met with intense abuse on home soil for blasting the Iraq invasion in 2003.
The 59-year-old comedian himself pulls no punches. Famously fired from his late-night talk show 'Politically Incorrect' for stating the September 11th attacks of 2001 were not acts of cowardice, he has not stopped mincing his words as host of HBO political talk show 'Real Time with Bill Maher'.
“There's a rule – I don't know where it comes from or if anyone wrote it down – as an American you're not supposed to talk badly about your country. You can criticize it when you're in America, but when you go abroad you're supposed to talk about how great it is,” he says.
“Now, I'm not going to do that [in Norway], because my whole act is to talk shit about America.”
Maher's tour kicks off in Amsterdam on Wednesday this week and will hit the Göta Lejon theatre in Stockholm on Tuesday, May 26th, followed by a stop in Oslo the next day.
“If you're an American comedian you can't speak other languages well enough to perform in them, so we look for countries that are completely fluent in English. But I'm already starting off feeling guilty because I thought it's rude to go to another country and not speak their languages,” says Maher.
He reveals he has been working on the material for the tour – his first ever in Europe – for “months and months and months” to make sure he brings out the laughs.
“I have a contact in each of the countries I'm visiting, and I've been emailing people in Amsterdam, Oslo and Stockholm asking questions like 'do they know what Cheetos are?' or 'do they know who Ariana Grande is?' In 95 percent of the cases they emailed back and said 'you're good to go',” he says.
“I'm always nervous that foreign audiences are not going to understand me, but they always confound my expectations and I'm so impressed. Again, it's only the American audience I have a problem with!”
On his talkshow, Maher regularly puts forward Scandinavian countries such as Norway as shiny beacons of liberal social democracy, and many of his views would be unlikely to cause a stir in the Nordic country: he's a supporter of same-sex marriage, and a strong proponent of animal rights and the fight against global warming.
However, some of the atheist comedian's recent remarks about religion, and Islam in particular, have sparked some tension even in his own left-leaning political circles. A clip in which Hollywood actor Ben Affleck accuses Maher of “gross” and “racist” comments after he describes Islam as “the only religion that acts like the mafia that will kill you if you say the wrong thing” went viral last year.
In Norway, many left-of-centre fans are likely to side with Affleck. So how will the Oslo crowd react to his stand-up routine?
“I hope it's not a problem, but you never know. That's why I'm doing this tour, to find out. I never think I say anything that's offensive, but other people think I do. To me political correctness is just another way of saying bullshit. The fact that a religion oppresses a lot of people, is not going to make me stop being on the side of the oppressed,” he says.
Maher, who received a Hollywood Walk of Fame star in 2010, grew up in New Jersey in the early 1970s and made his first appearances on US legends Johnny Carson's and David Letterman's shows in 1982. And despite his provocative material, he says his first priority remains his childhood dream to make people laugh.
“I think I just wanted to be a comedian because my father was very funny and it was something that bonded us as a family when mom, dad, my brother and sister would sit in front of the TV and all laugh at the same thing. It was a communal feeling and I wanted to be the person to make everyone laugh,” he says.
“When you get into comedy you have to find what makes you unique in the world and find your voice. I discovered that I was interested in politics and then I just developed that.”
Url copied to clipboard!