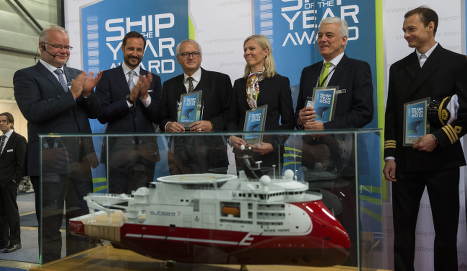 Gunvor Ulstein, chairman of Subsea 7 receives the Ship of the Year award from Crown Prince Haakon in 2013. Photo: Berit Roald / NTB scanpix
The company, which is based in Luxembourg but listed on the Oslo stock exchange, said the measures were necessary “in view of the difficult business and economic conditions in the oil and gas market and declining workload.”
“It is envisaged that the overall reduction in the global workforce would be approximately 2,500 by early 2016, down from the 13,000 reported at the end of 2014,” Subsea 7 said in a statement.
The group provided no details on which divisions or geographic locations would be affected, indicating only that consultations had been held with employees in Norway and Britain.
It also said it planned to sell up to 11 of its vessels, of a fleet of 39 in use and five under construction.
“These cost reduction plans will allow us not only to adapt to present market challenges but also to maintain our competitiveness and the long-term viability of our business,” the company's chief executive Jean Cahuzac said.
“This will enable us to emerge stronger once the downturn ends. Reducing employment is not a decision we take lightly but one that is necessary in today's difficult oil and gas environment.”
Like many of its rivals, Subsea 7 has suffered from the slump in oil prices, which has forced many energy groups to postpone or cancel investments and projects.
Despite new orders worth $1.0 billion (888 million euros), Subsea's order book fell to $7.61 billion at the end of the first quarter, from $8.24 billion a year earlier.
According to DNB Markets, some 15,000 jobs have been slashed in the Norwegian oil sector since 2013.
In February, unemployment in Norway reached its highest level in 10 years, climbing to 4.1 percent. Oil and gas account for more than a fifth of the country's gross domestic product.
Norwegian oil giant Statoil may cut 2,400 jobs, or more than 10 percent of its workforce, Norwegian media has reported.
In late afternoon trading, the Subsea 7 share price was up 1.36 percent at 85.95 kroner on the Oslo stock exchange