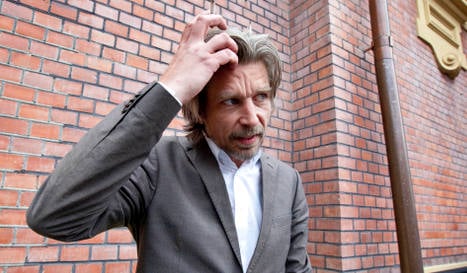 Karl Ove Knausgård at Norwegian Festival of Literature in Lillehammer in 2012. Photo: Geir Olsen / NTB scanpix
Knausgård has been met with crowds at almost every stop of this month’s book tour of the US to promote the US launch of the sixth and final instalment of his master work My Struggle, with 1,200 people turning up to a book-signing in San Francisco.
In a New York interview with Norway’s NRK channel, Knausgård conceded that he would “probably write a new novel eventually”.
But according to Dagbladet, he went further in an interview with them, revealing that he had already started planning it.
Knausgård wrote at the end of Volume Six that he would “enjoy, really enjoy, the thought that I am no longer an author”, and when he released the book in Norway in 2011 he told interviewers that he would never write another novel.
But,  as he told NRK in the New York interview, he has in fact been hugely prolific since finally finishing his gigantic work.
“I’ve never written as much as I have since I stopped being a writer,” he told NRK in an interview in New York. “I have written enough essays, articles and travelogues to create Volume 7, but now I want to do something else.”
“There are four very small books, but I will probably write another novel eventually,” he added.
Whatever the new novel is, it's likely to be very different from the work which made his name.
Knausgård told the Guardian newspaper in an interview in March that he longed to see the back of the distinctive style he developed for My Struggle.
“What I have to do is get out of that way of writing," he told the Guardian in March. "I get so tired of my own voice. It’s like it’s producing something like a machine. I need to get somewhere else. I can’t keep using that technique. So every day I try to write one page about one thing, and I will do so for a year.”
Url copied to clipboard!