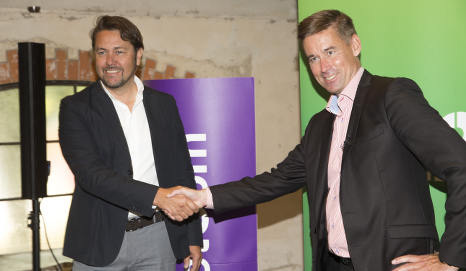 August Baumann, the head of Sweden's Netcom after
Norway entered the list in 24th place, sandwiched between the other two new entrants Poland (23rd) and Finland (25th).
The Foreign Direct Investment Confidence Index examines political, economic and regulatory changes to predict which countries are likely to draw foreign investment in the near future.
“Despite a small market size, it’s strong natural resource base and highly educated workforce have contributed to developments in high-growth sectors such as renewable energy and IT,” the report reads.
It also praised Norway’s recent increase in tax deductions for research and development.
According to the report, Europe was seeing “unprecedented interest from business executives”, pushing it to set an “all time record” for the report with 15 countries in the top 15.
The report put this down to reduced uncertainty over the debt problems in Greece and other countries, and the European Central Bank’s decision to embark on a programme of quantitative easing.
All the Nordic countries except Iceland now make the list, with Sweden leading the way in 18th place and Denmark in 20th place.
Norway’s leading foreign investor was Sweden, with TeliaSonera now trying to buy Norway’s Tele2 company for $740m.
The United States led the ranking, followed by China, with the UK leading the way in Europe in 3rd place.
The report, published on Monday, came shortly before a new European Commission report warned that the outlook for Norway’s economy has become “less bright”, as a result of the halving of the oil price.
After posting relatively strong growth of 2.2 percent in 2014, helped along by a spurt of growth in the last three months, growth is expected to slow to 1.5 percent in 2015 as the impact of oil’s decline sinks in, the EC said on Tuesday.
Url copied to clipboard!