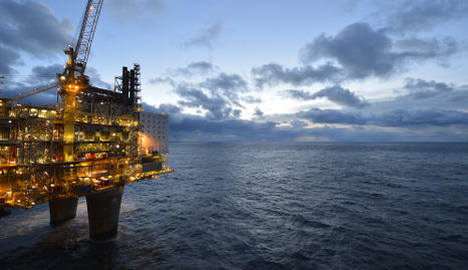 Statoil's Oseberg A facility. Photo: Harald Pettersen/Statoil
In the first quarter, the company posted a net loss of 35.5 billion kroner (4.2 billion euros, $4.73 billion), far from the 23.6 billion kroner net profit it registered in the same period last year when crude prices hovered
around $100 a barrel.
Adjusted net profit — which strips out exceptional items and which is the market's reference figure — was slashed by more than half to 7.0 billion kroner, from 15.8 billion a year ago, yet remained above analysts' forecasts of 4.6 billion.
In late-morning trading on the Oslo stock exchange, Statoil's share price was up 3.19 percent to 158.4 kroner.
Statoil said it had to write down 46.1 billion kroner in assets, most related to its US shale business, with the high operating costs rendering them less profitable as oil prices plunged.
"We take a more cautious view due to the uncertainty in the commodity markets," said new chief executive Eldar Saetre.
"The underlying quality of the assets and the operational performance remains unchanged," he added.
Like its rivals, Statoil has struggled with the drop in the oil price, which, when converted into Norwegian kroner, has plunged by 40 percent in a year.
For the same reason, French oil group Total and Britain's BP on Tuesday reported a drop in their adjusted net profits, by 22 percent and 40 percent respectively, though both also exceeded analysts' forecasts.
Statoil saw its oil and gas production rise by four percent to 2,056 million barrels of oil equivalent (mboe) per day.
The Norwegian group, which is two-thirds state-owned, earlier this year slashed its investment budget by 10 percent to $18 billion for 2015.
Faced with costs that remain high after a decade-long oil boom, Statoil could cut 2,400 jobs, or more than 10 percent of its workforce, Norwegian media reported in mid-April.
In 2014, the company eliminated, outsourced or redistributed a total of 1,950 jobs.
Statoil's difficulties are also weighing on the Norwegian economy, as oil and gas account for more than a fifth of the country's gross domestic product.
According to Statistics Norway, some 30,000 jobs could disappear in the country's oil-related sectors by 2018.
Statoil nonetheless judged its financial situation to be "robust", and said it would pay out a dividend of 1.80 kroner per share for the quarter.
Url copied to clipboard!