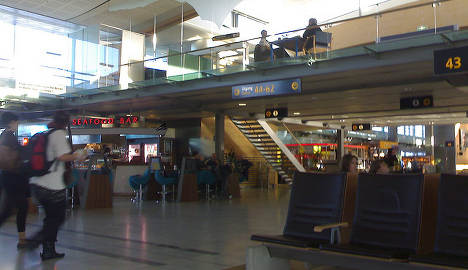 The woman, who was in her 30s, was told when she arrived at the Norwegian Airlines desk at Gardamoen Airport she could not put her cat on the flight as she had not given advance notice.
Shortly afterwards she returned without the cat and attempted to check in her luggage.
“The two Norwegian employees were suspicious when the woman came back after half an hour and wanted to have a boarding pass only for herself,” Solfrid Nyheim, a police officer stations at Gardermoen airport told Norway’s public broadcaster NRK.
“When they went out to look for it, they found the cat in a cage and came to us with it.”
When the police apprehended the woman she claimed that she had given the animal to a friend who had come to pick it up in his car.  However, airport CCTV footage disproved her story.
“Personally, I react very strongly against someone who just dumps their cat like this,” Nyheim said, adding that she had passed the animal over to Animal Protection Norway, an animal rescue charity.
“We can not deliver it back to an owner who treats it like this,” she said.
Although such incidents are thankfully rare, they have happened before at the airport.
Nyheim told NRK that she herself had once given a home to a cat abandoned at the airport.
“I called him Snow and he now stays in my home, as my cat number five,” she said.
Url copied to clipboard!