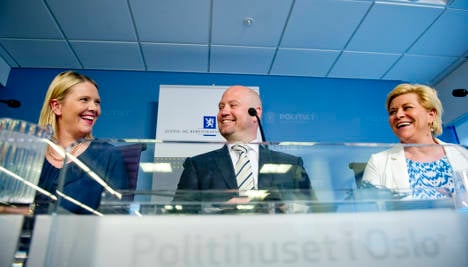 Agriculture Minister Sylvi Listhaug (left), Justice Minister Anders Anundsen (centre) and Finance Minister Siv Jensen (right) announce the new naimal rights squad on Monday. Photo: Jon Olav Nesvold /
"First of all, it's important to take care of our animals, so that they enjoy the rights they have and that there be a follow-up when their rights are violated," Agriculture Minister Sylvi Listhaug said, describing animals at risk as "often defenceless".
The initiative "can also help fight crime and attacks against people, since studies show that some of those people who commit crimes and misdemeanors against animals also do the same to people", Listhaug said.
The initiative will be tested out for three years.
Police in the western county of Sor-Trondelag will appoint three people — an investigator, a legal expert and a coordinator — to fight animal abuse.  ¨
Animal rights groups hailed the initiative. "The process of taking animal abuse seriously has begun," said Siri Martinsen of the animal rights' group Noah.
In 2014, 38 cases of animal abuse were reported to police in Norway, according to public radio and television NRK.
Under Norwegian law, acts of animal abuse carry a maximum sentence of three years in prison. Similar animal rights police units operate in the Netherlands and in Sweden.