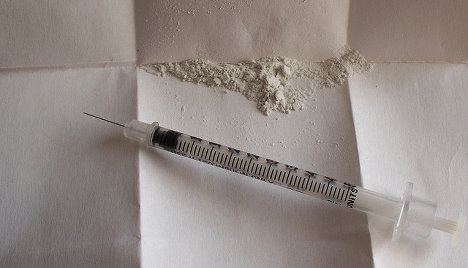 A needle and some unidentified powder. Photo: Dimitris Kalogeropoylos/Flickr
The study, conducted by the Norwegian Institute for Public Health, looked into the extent of drug and alcohol dependence among Norwegians diagnosed with serious mental health disorders.
Every fourth patient with schizophrenia and every fifth with bipolar disorder also suffered problems with substance abuse.
One in ten people who were severely depressed also had problems with alcohol or drug-related health problems.
It is estimated that one in forty Norwegians indulge in some form of substance abuse.
”An important finding in the study was that young people in the early stages of schizophrenia are particularly prone to substance abuse,” Ragnar Nesvåg who co-authored the article, told Norwegian broadcaster NRK. “Substance abuse complicates treatment and leads to poorer prognosis, and we should consider measures to reduce the use of illicit drugs among adolescents.”
Nesvåg and his co-authors claim that political moves worldwide to liberalise some drugs could have a detrimental effect on mental health patients.
“Of particular importance is the widespread use of cannabis and stimulants, which may be expected to increase, given the political movement in US and elsewhere aiming to legalize the use of cannabis,” they wrote in an article based on the data.
Researchers Pål-Ørjan Johansen and Teri Krebs from the Norwegian University of Science and Technology in Trondheim, are two of the most prominent experts arguing that the risks to mental health from the use of LSD and other hallucinogens have been exaggerated.
Url copied to clipboard!