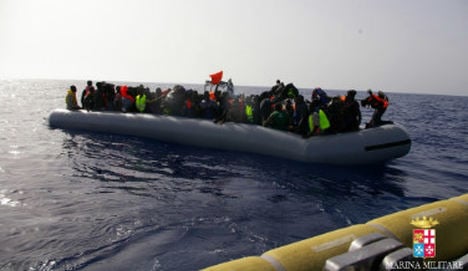 Migrants attempting to cross over to Italy rescued by Mare Nostrum, the Italian government's rescue effort. Photo: Italian Navy
The Scandinavian country was originally due to assist the multinational Triton operation, run by the European coastal agency Frontex, as of August 1.
But the government, under pressure from the opposition to speed up its contribution following the weekend sinking of a trawler carrying migrants off the Libyan coast that is feared to have left 800 dead, offered to accelerate its efforts.
"The latest tragedy, in which more than 800 people lost their lives, has once again drawn attention to the desperate situation for refugees and migrants attempting to reach Europe," Norwegian Prime Minister Erna Solberg wrote in a letter to the heads of the European Commission Jean-Claude Juncker and the European Council Donald Tusk.
"Norway will bear our share of the responsibility," she said.
The Nordic country is not a member of the EU but cooperates very closely with the 28 members, in particular because of its membership in the passport-free Schengen area.
Non-EU members Switzerland and Iceland are also taking part in the Triton operation.
In addition to the vessel that Norway has offered to contribute for an initial period of six months, Oslo announced earlier this week it would donate some 6.25 million euros ($6.7 million) to help the migrants, channeled primarily through the UN's refugee agency.
European Union leaders were to hold an extraordinary summit in Brussels on Thursday on the Mediterranean migrant crisis.
Url copied to clipboard!