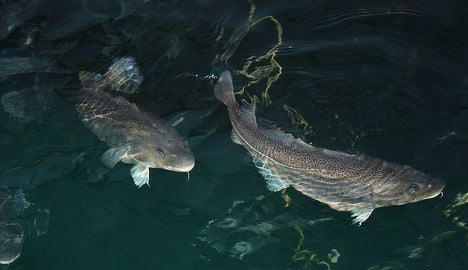 These healthy looking salmon need no sugar pills. Photo: Norsk Havbrukssenter/Flickr
“We think it’s totally unacceptable from a scientific point of view because there’s no scientific basis for using homeopathy,” Ellef Blakstad, scientific director of the Norwegian Veterinary Association, told The Local after calling on the country’s Food Standards Agency to delay implementing the directive.
“If you start using homeopathy, you prolong the time when the animals are not getting adequate treatment and that’s a threat to animal welfare.”
Norway this year began the arduous process of bringing the 2009 European regulation on organic aquaculture into national law.
The directive calls calls on farmers to use “substances from plants, animals or minerals in a homeopathic dilution” as the first line of treatment should farmed fish or shellfish develop health problems.
They are only allowed to resort to mainstream “allopathic” treatments a maximum of two times per year if their product is not to lose its organic certification.
Homeopathy is a field of alternative medicine which claims that diseases can be treated and prevented by using extracts of  herbs and minerals diluted to such low levels that few if any molecules of the original substance remain, due to the 'memory' of water.
Drawing on extensive scientific research, the Norwegian Scientific Committee for Food Safety, has already ruled that the homeopathic medicine is ineffective in treating animals.
The ‘placebo effect’, which can make homeopathic treatments helpful simply by raising the patient’s morale, does not apply to farm animals, and certainly not to fish.
In their official response to a consultation put out by Norway’s Food Standards Agency, the Norwegian Veterinary Association last week called on Norway’s government to remove all references to homeopathy from forthcoming national regulation, and to begin discussions with the European Union to ensure that only “scientifically documented” therapies are recommended in future.
“We want the Norwegian government, for as long as they are allowed to do it, to take this wording out, and when they have to put it in, to use their influence to encourage the European Parliament to take it out,” Blakstad said. ” “Although our government’s ability to do that is quite limited.”
Norway’s Food Standards Agency said that Norway’s relationship with the European Union gives it little scope to change the wording.
“This is an EU regulation, and so it should be taken verbatim into Norwegian regulations. It is not allowed to be changed,” Monica Stubberud, a senior official at the agency, told Dagbladet newspaper.
Salmon farming is a huge industry in Norway, with some 1.2m tonnes of the fish produced in 2014, dwarfing production in all the other countries int the world combined. The harvest was already worth 31bn Norwegian ($4bn) in 2012.