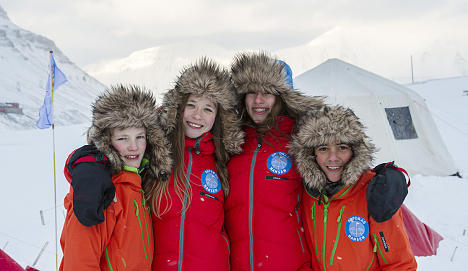 The four teenagers photographed in Svalbard before beginning their expedition. Photo: Geir Evensen/NRK/NTB scanpix
"The trip has been very challenging, but it has also been great fun to ski to the North Pole," Johanne Jerijærvi, from Kirkenes in the far north of Norway and the youngest of the  four, told Norway's NTB newswire over satellite phone.
"The worst thing about the whole day was really just standing up and getting out of my sleeping bag and starting to ski. Now I'm just looking forward to lazing around."
Erika Gjelsvik, Johanne Jerijærvi, Elias Damli and Johannes Breivik, all of whom are 13 years old, are the youngest Norwegians ever to ski to the pole.
They reached their goal on Tuesday after a gruelling six days on skis, as part of a TV programme by Norwegian broadcaster NRK which saw them they follow in the footsteps of Norwegian polar explorer Fridtjof Nansen.
The TV programme ”Oppdrag Nansen” (Mission Nansen) is set to air on Norway’s public broadcaster NRK next winter. More than 600 children applied to take part.
In preparation for their adventure, the four skiers were sent to a boot camp on Svalbard, where they braved  polar bears and harsh weather conditions.
During their time in Svalbard, they experienced storm force winds that blew their main tent off its poles.
The adventure was not without its challenges, with temperatures dropping to -20 C and snow fog affecting visibility. On the fourth day, the youngsters had to traverse a large crack in the ice, with freezing seawater below.
Although Fridtjof Nansen was hailed as a hero on his return from the Arctic in early 1896, his expedition never in fact reached the North Pole.
In order to survive the winter of 1895, Nansen built a hut and ate walrus blubber and polar bear meat. Unlike Nansen himself, the teens made it to the pole, albeit with the help of a helicopter for the first leg of the journey.
Url copied to clipboard!