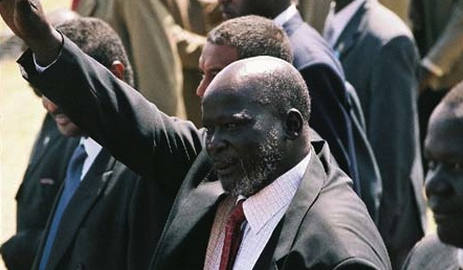 John Garang waving. Photo: PS Burton/IUSAID/Wikimedia Commons
According to a new memoir by Halle Jørn Hanssen, the former head of the charity Norwegian People’s Aid, Norway helped foot a total phone bill of between five and eight million Norwegian kroner ($1.1m) run up by John Garang, the leader of  the South Sudan People’s Liberation Movement (SPLM), between 1997 and 2002.
Although Norwegian authorities initially maintained the ability to switch the phone on and off, by 1998,  Garang had somehow hacked it so that he could use it as he wished, leading the bill to escalate dramatically.
Norway nonetheless continued to pay the bill, however, with the humanitarian organisation Norwegian People's Aid paying between 1m and 1.5m kroner a year.
"I have no regrets. I think we did the right thing," Hanssen told The Local. "It would have been catastrophic to take away Garang’s satellite phone as the peace negotiations were unfolding and developing. I think that was a necessary political support for Garang in order to be able to continue as a liberation commander."
Hanssen said that Jan Egeland, then a state secretary in Norway's foreign ministry, had arranged for the 40kg phone to be flown out to Garang during secret negotiations with the SPLM between 1993 and 1995.
The payments were channelled to the Bergen-based satellite phone company Nera, through the Chr. Michelsen Institute in Bergen, which was then in turn reimbursed by the ministry.
Jan Egeland, who was at the time a state secretary in the foreign affairs ministry, told Norway's NRK that Norway had had no choice but to foot the bill.
“We signed this agreement with Garang, because otherwise there would have been no peace negotiations at all,” he said. “We had to communicate with the parties so having a phone that we could turn on and off was the only option.”
However the centre-right government which came to power in 1997 refused to continue the payments, meaning that Garang's phone was eventually disconnected.
In his memoir, Hanssen remembers Garang making an angry call to the Kenya offices of Norwegian People’s Aid (NPA).
"My programme director in Nairobi called me and said, 'Halle, what can I do? I have an invoice from John Garang, which had been paid by the foreign ministry but is no longer,'" Hanssen told The Local. "The line has been cut and John Garang is furious because he is in the middle of a battle and has lost all communications."
Hanssen decided to pay the the 100,000 kroner bill. But when he contacted Norway's foreign ministry about it, they appeared ignorant of the phone's existence.
As a result, over the following four years NPA paid out nearly one percent of their Sudan aid budget, between one and one and a half million kroner every year, to cover Garang's phone costs.
Garang went on to briefly serve as the vice president of Sudan from July 9, 2005 until his death in a helicopter crash in July 30, 2005.
Norway helped broker the 2005 Comprehensive Peace Agreement between Sudan's government and the independence fighters from the south of the country,  paving the way for South Sudan's emergence as an independent country in 2011.
However, throughout the negotiations, the Sudanese government in Khartoum viewed Norwegian People's Aid with suspicion, accusing it of openly supporting the SPLM rebels.
A 1999 documentary by Norway's NRK alleged that the NPA had even allowing SPLM to use its planes to transport weapons and landmines to camps in the bush.
Url copied to clipboard!