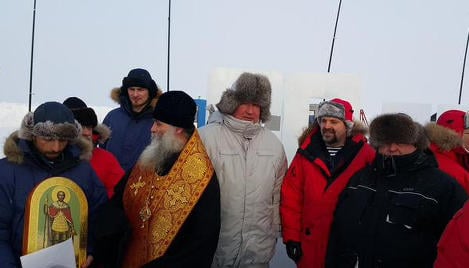 Russian foreign minister Dmitry Rogozin amid others from the Russian group who travelled to Svalbard on the weekend. Photo: Twitter
"We are not too happy about it," Rune Bjastad, a spokesman for the Norwegian foreign ministry, told AFP.
Dmitry Rogozin landed in Svalbard on Saturday and promptly announced his arrival over Twitter.
"North Pole. Our Station-2015. Anniversary of the 'Battle on the Ice' on Lake Chudskoe. But it's all quiet & as planned," wrote the Russian deputy prime minister.

North Pole. Our Station-2015. Anniversary of the "Battle on the Ice" on Lake Chudskoe. But it's all quiet&as planned) pic.twitter.com/fm7m2YaUfY

Rogozin is among around 150 Russians and Ukrainians placed under an EU travel ban.
Norway is not a member of the EU but has aligned itself with the bloc's sanctions against Russia.
Although Svalbard falls under Norwegian sovereignty, access to the archipelago is governed under a separate international treaty which allows everyone access.
Because of this, Norway earlier this spring took the step of "clearly informing the Russian embassy in Oslo that people on the (blacklist) were not welcome in Svalbard," another foreign ministry spokesman, Frode Overland
Andersen, said. "It is therefore regrettable that Rogozin has been to Svalbard," he said.
"We have asked the Russian authorities for an explanation," he added.
Rogozin arrived in Svalbard on a direct flight from Russia, and left Norway on Sunday, the foreign ministry said.