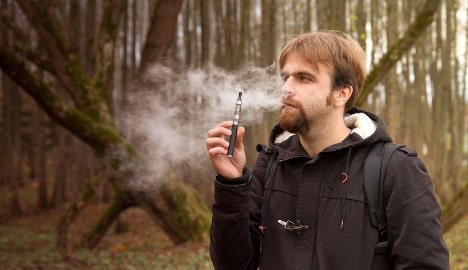 E-cigarettes are perhaps not so clean and healthy as was once thought. A man smoking an e-cigarette. Photo: Shutterstock
Norway's health minister, Bent Høie, said he was surprised by the findings of the report, which was commissioned by the government to help it formulate new regulations on e-cigarettes.
”I have to admit that I thought that 'e-fog' did not pose a risk for the surroundings," he told the news agency NTB. "This report will probably surprise the population and those who use e-cigarettes."
NIPH researchers found that the nicotine content in the vapour from the e-cigarettes was so high that there was a risk that passive smokers would get addicted.
The report showed, however, that e-cigarettes were less harmful than ordinary cigarettes, even though the long-term effects are unknown.
It is presently illegal to import e-cigarettes into Norway or to sell them within the country, as the Tobacco Act prohibits the launch of new tobacco or nicotine products.
E-cigarette aficionados have, however, found a loophole, VG reports, as it is legal to order them online for personal use and then to smoke them in public places, even on public transport or in schools.
The Ministry of Health, which commissioned the report, is seeking to regulate e-cigarettes in Norway.
”We are looking into how this can be regulated, particularly with regard to passive smoking," Camilla Stoltenberg, director of the Institute of Public Health, told VG. "Nicotine has acute effects on the cardiovascular system and it can increase the heart rate, blood pressure and resistance in the blood vessels. It can also affect cardiac muscle function.”
A previous report from the Japanese Institute of Health found the the level of carcinogenic substances in fog from e-cigarettes was ten times higher than found in the smoke of ordinary cigarettes, a result that the Norwegian study did not replicate.
Url copied to clipboard!